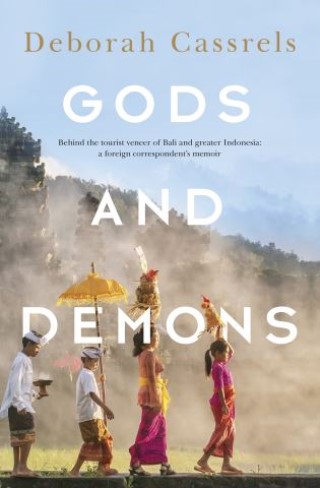 Behind the tourist veneer of Bali and greater Indonesia: a foreign correspondent's memoir

In 2006, journalist Deborah Cassrels embarked on a personal odyssey to the Indonesian island of Bali. She was quickly enchanted by everything that most tourists find - its beauty, easy lifestyle, exotic culture, stunning beaches and striking landscapes.

Three years later she moved there and became The Australian newspaper's first Bali-based correspondent, covering events throughout Indonesia. Peeling back the tourist veneer, Cassrels soon found herself caught up in a tapestry of beauty, mystery, power, corruption and violence.

From the newly jailed, reeling Bali Nine drug gang and the gruesome executions of their condemned bosses, to stories of shackled people, infamous terrorists, powerful tycoons and lavish royal celebrations, Cassrels reveals a hidden side to the mystical Hindu paradise and vast Indonesian archipelago in which all is not as it seems.

Deborah Cassrels has been a journalist for over 40 years. Based in Bali since 2009, she has written extensively for The Australian newspaper on refugees, politics, terrorism, crime, the Bali Nine Australian drug smugglers among other issues.

She covered the 2015 executions of the two Bali Nine ringleaders and was a finalist for the Walkley Freelance Awards in 2016 for her work on terrorism in Indonesia.

Previously a features writer at the Weekend Australian Magazine, she contributes to The Times of London, The Guardian and SBS. Her work has also appeared in The Sydney Morning Herald, The Age and The Australian Financial Review.

Beginning her career as a reporter for the New Zealand Herald, Deborah moved to Australia in the mid-1980s to work for The Australian and the Courier-Mail. She has freelanced in the US, Europe and Central America.

Deborah has two children and divides her time between Indonesia and Sydney.